Japanese culture is renowned for its fine craftsmanship and the pursuit of perfection. The same spirit extends to food, too. Even a non-connoisseur of food would recognize Japan as one of the best places in the world to enjoy delicacies. Indeed, as of 2017 Tokyo alone has 12 Michelin 3-Star restaurant, surpassing even Paris. In Japan, there are 296 1-star restaurants, 98 2-stars, and 25 3-stars. Most of them are Japanese-style cuisine (kaiseki or sushi). This is quite remarkable, especially given that Michelin is usually more partial to French cuisine.

In this post I would love to share a dining experience of mine at a Michelin 3-Star restaurant, Usuki Fugu Yamadaya, the only one in this tier specializing in dealing with fugu (pufferfish). I know this seems to be a digression from the theme of this blog, which is credit cards. But hey, one of the reasons we accrue those points is to redeem for aspirational travel experiences, be it luxurious first class in the sky or fancy suites on the ground. Yet beyond airplane cabin and hotel rooms, there is much more to be explored in the world.

I know this sounds crazy, but yes, fugu is one of the most poisonous and dangerous food in the world. It contains a highly lethal neurotoxin called Tetrodotoxin. Almost each year people get killed due to the consumption of fugu that is treated improperly before being served. As a result of such health risks, chefs require a special permit to handle fugu. Surprisingly though, fugu is still considered as one of the finest delicacies in Japan because of its texture, flavor, and perhaps above all, rareness. For foreign travelers going to Japan, the surest way to snag a seat in any upscale restaurant is through your hotel or your credit card concierge service (such as American Express Platinum Concierge, available to American Express Platinum cardholders). This is because either the restaurant staff only speaks Japanese, or the restaurant does not accept reservations from abroad. In a broader sense it seems to me that you need a point of contact within Japan to confirm your reservation. That being said, I have had positive experiences with both hotel and credit card concierge services. For this one, I would love to thank the concierge at Andaz Tokyo Toranomon Hills (which is a fantastic property by the way) for confirming this reservation on my behalf. Getting to the restaurant

Like many upscale restaurants in Japan, Usuki Fugu Yamadaya is situated in a very low-key neighborhood. Frankly it is not easy to find, but with Google Maps you will be fine. The nearest metro stations are Ropponqi and Hiro-O, about 15-min walk away. If you stay in the Minato Ward, I would suggest taking a cab to save most of the hassle. Usuki Fugu Yamadaya only has a fixed menu, or a series of “set course” available, a common practice by many Michelin starred restaurants. Since the restaurant tries to ensure food quality by selecting the most fresh ingredients, you are kindly asked to pick the menu at the time of reserving a seat. Don’t worry if you don’t understand Japanese though, as your concierge will do the translating for you. After being seated, we were presented with a detailed menu of the dinner tonight on a piece of high-quality hard paper. We chose the Fugu 8 courses to fully savor the fugu experience, which turned out to be a wise pick. The drink menu was available separately and was pretty comprehensive. I ended up ordering a cup of sake to accompany the fish.

Our dinner begins with a cup of Hire-Sake—sake prepared in a visually appealing way. As you can see there is something in the cup. That turns out to be a piece of seared fugu fin (!). In Hire-Sake, scorched fugu fin is added when the drink is served hot, vaporizing some of the alcohol inside. Next comes showtime: the ethanol vapor is ignited for a few seconds with beautiful blue flames, before the server eventually covers the lid and quenches the fire. Now you have a cup of sake with a hint of smoked wood and seared fish. The taste? Very interesting … Our servers quickly brought our hors d’oeuvre, including tuna fish, seaweed salad, pickles, and abalone. The portion size as you see is VERY small. However, they did a good job in terms of opening up your appetite. 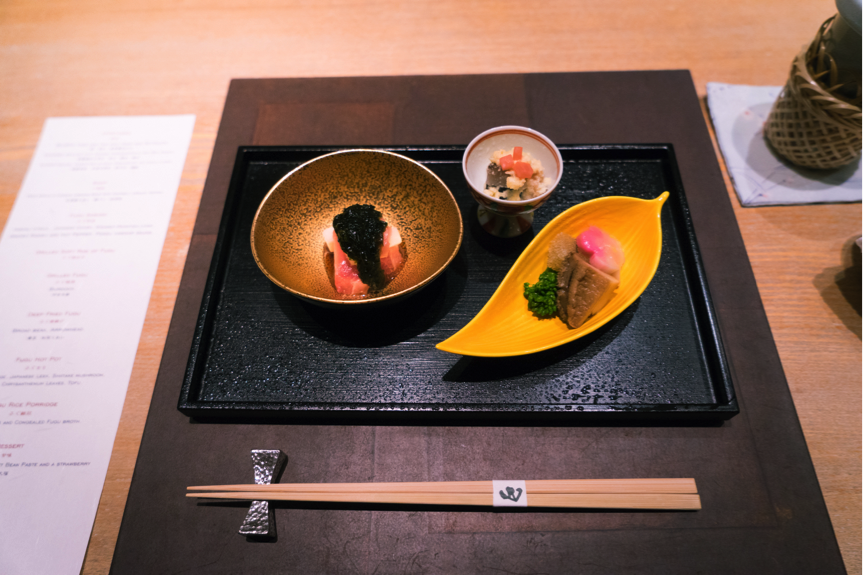 Following appetizer is tofu miso soup. The soup is super thick, and has a strong, rich flavor. To some extent I feel this is too much. The soup readily floods your taste, causing troubles for you to savor the next course that has a subtle taste—fugu sashimi. While having soup, we watched our chief chef preparing sashimi (we sat at the bar). Very ENJOYABLE to watch. We were amazed by the chef’s craftsmanship in fish slicing. Each and every piece of sashimi is sliced down to a few millimeters. Fugu meat is extremely chewy, so the sashimi has to be really thin to be edible. If this is a test for fugu chefs, apparently our chef scored an A+. Isn’t it amazing that such precision is achieved solely by hand?

The presentation is also enjoyable. On the right are condiments that supposedly accompany the sashimi. From the top to bottom are chives, monkfish liver, and scallion soaked in vinegar. We were instructed to put a small bite of monkfish liver and chives in the center of the fugu sashimi. Next roll the fish like a burrito, and dip it in the sauce. However personally I would avoid taking too much of the seasoning because the weak flavor of the fugu itself could be overwhelmed.

Sake is a great companion to the raw fish

Now comes the strange part … seared fugu testicles full of liquified semen. 😂  Creepy though it may seem, it is what it is. I have to confess though they taste fairly well, the highlight is not flavor but the feel. When you broke the outer skin, the warm fluid inside quickly filled your mouth. That just feels like another cup of really flavorful soup. Gladly fugu testicles are the only weird dish we encountered at our 8-course dinner. It is followed by steamed fugu. The heat and the moisture clearly soften the fugu meat. Now even a large chunk is edible. In terms of texture, however, I don’t find steamed fugu to be much different from, say, sea bass. Soon the deep-fried fugu is served. To our surprise it is not oily at all. It remains unclear to me how they could deep fried the fish while removing much of the oil. At any rate, the taste is great. I especially enjoyed chewing the thin crust. 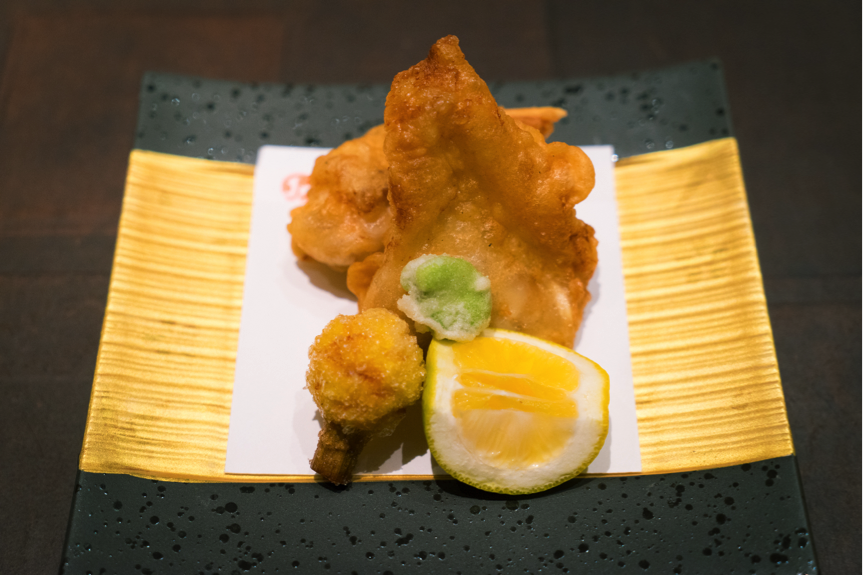 Now comes the climax of the dinner: fugu shabu-shabu and rice porridge. 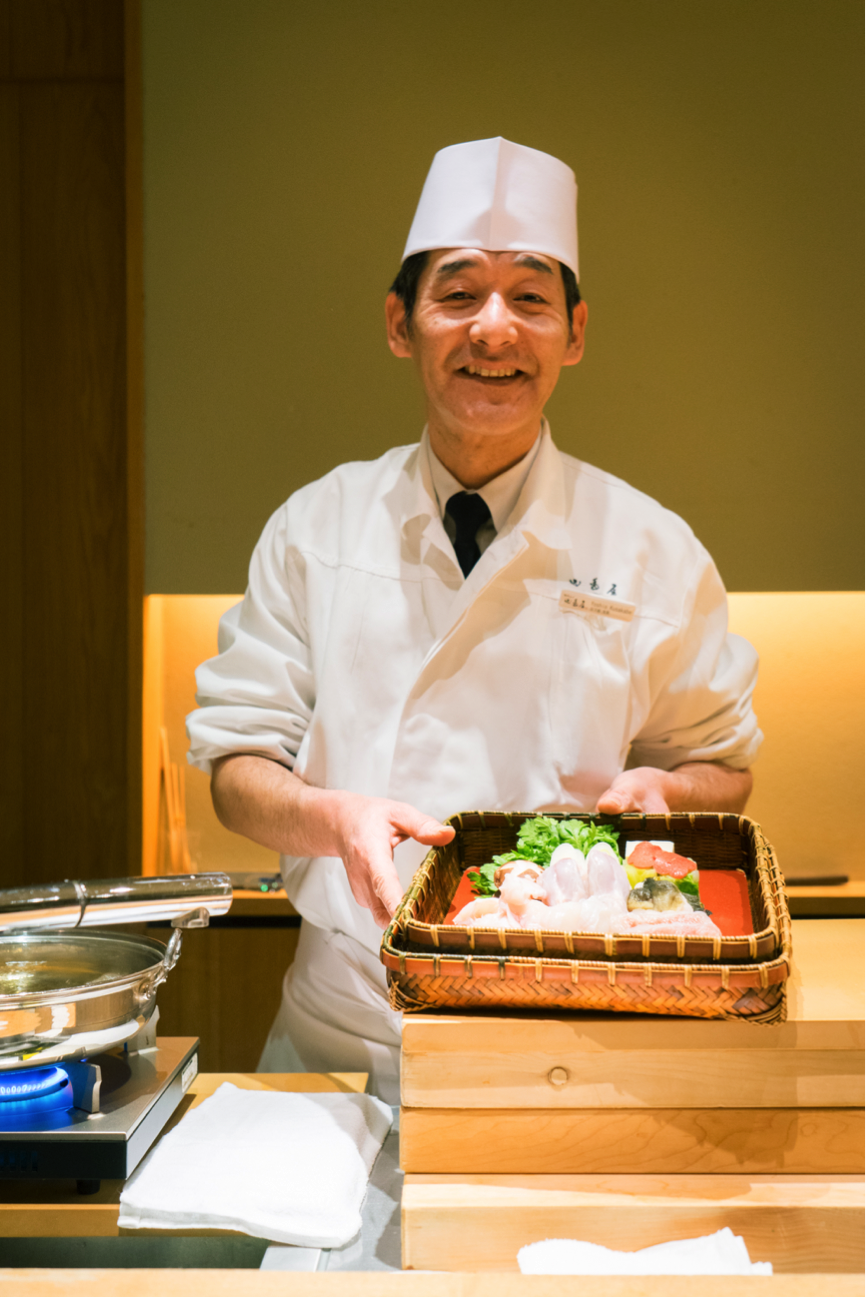 After several minutes, a clear fugu soup was ready. The soup is incredibly rich in umami flavor. As the soup in the hot pot keeps boiling and getting rid of excess water, flavors get gradually enriched in the remaining soup. Then rice was added to the soup to soak all the food essence, culminating in a bowl of fugu rice porridge. Although there was no fugu inside, the flavor was all extracted and concentrated in the soup. Personally I feel this was the best dish of that night. We were pretty stuffed with the rice porridge, and thankfully our dessert was pretty light. On the left is fresh strawberry coated with rice cake, and on the right is matcha green tea. Tip was included in the bill and two of us ended up paying 80,000 Yen (roughly $800). I know it is expensive, but I found it worth every penny. many upscale restaurants in Tokyo and Osaka accept foreign credit cards (Amex though is a different story), but in some less metropolitan areas or some really tiny restaurants, be sure to bring some cash.

Eventually I used my Chase Sapphire Preferred credit card to pay the bill so I could earn 2 UR points per dollar spent that I can later transfer to United miles or Hyatt points. I don’t have the Chase Sapphire Reserve which would earn you 3x UR points, but if you do, it would be a good choice.

Is the food good? Absolutely yes. The sashimi and the rice porridge were beautifully executed.

Does it live up to the hype of Michelin 3 Stars? Well, not necessarily. There are a handful of other great fugu restaurants in Osaka and Tokyo that may offer a better value.

Yet don’t get me wrong, if we forget the aura of Michelin Stars for a moment, dining at Usuki Fugu Yamadaya is truly a wonderful experience. I would definitely recommend fish-lovers to try this restaurant if your budget is not super tight and/or you’re on a special occasion. This pufferfish will not let you down.