Qsuite coming to Shanghai in May, with award space up to 4 passengers 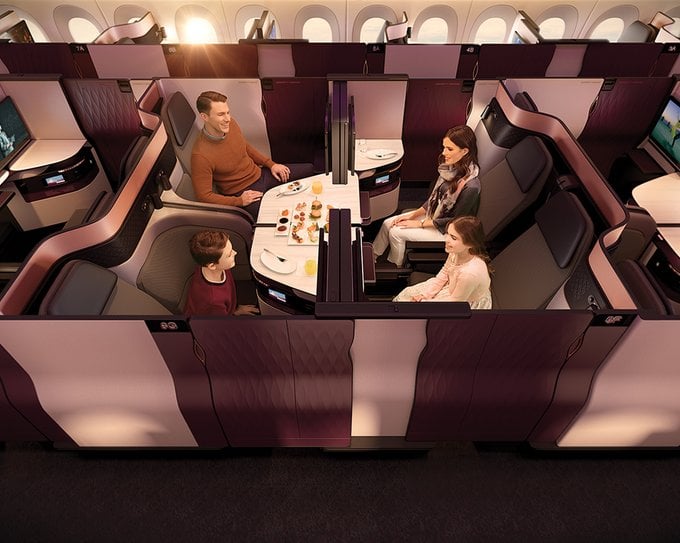 Since the launch of Qsuite last year, we have seen its expansion to several key global cities. In the US, it includes New York JFK, Chicago O’Hare, and Washington Dulles. In other parts of the globe, Qsuite currently serves London (LHR), Paris (CDG), and Seoul (ICN). Starting May 1st, Frankfurt will be added onto the Qsuite destination list.

There have been lots of rumors as where Qsuite will fly next. Today we spotted an announcement on Qatar’s Chinese website, revealing the next Qsuite destination.

Shanghai will receive Qsuite service in May

Starting May 15th, 2018, the daily QR870/871 between Shanghai Pudong (PVG) and Doha (DOH) will be upgraded to a Qsuite-equipped 77W. The seat map has been loaded and currently all seats are either taken or blocked. By contrast here is the seat map of QR870 on May 14th, just one day before the launch date. The old plane features Qatar’s 2-2-2 business class seating. Personally I am not a huge fan of Qatar’s old 2-2-2 business class. It is great to see Qatar steadily adding more and more routes with Qsuite.

Award availability on Qsuite to Shanghai

Historically Qatar has been very generous in releasing award inventory to flights to and from mainland China (though the same can’t be said for other destinations like London and New York). Fortunately, Qsuite does not appear to change it. For example we see some very nice availability out of Doha – enough for a family of four! Wouldn’t it be great for such a family to sit in the center seats?

On the return leg, we see slightly worse situation. Fewer dates have availability, but when there is, we still have 4 award seats open.

How to book Qsuite to Shanghai

Since Qatar Airways belongs to oneworld alliance, you could use your American Airlines miles, Asia Miles, Japan Airlines Mileage Bank miles, among others, to book this flight on Qatar.

For US-based flyers, flying to Shanghai via the Middle East is not very efficient time-wise. To make it worse, American Airlines routing rules forbid trans-Atlantic routing between US and Asia 2. So in order to book an itinerary like IAD-DOH-PVG (all in Qsuite!) you have to book it as two individual tickets. Personally I don’t find it that appealing.

However, if you have a travel plan between Europe and China, this could be a really great opportunity. For one, the redemption rate between Europe and Asia 2 is 75,000 – and don’t forget the 10% mileage rebate if you are a Barclay Red Aviator or Citi AAdvantage Platinum cardholder. What’s more, American does not charge fuel surcharges on QR.

Do you have upcoming travel plan to/from Shanghai and do you intend to try Qatar’s Qsuite?