Will Amex SPG Card Be Discontinued after Nov.15? Since Starwood has been acquired by Marriott last year, many people have had concerns about things like what the current Amex SPG card will be after complete merge or when the SPG card will no longer be available. So far, neither Marriott nor Starwood has made any official statement on the future of this card, but we do know it will be off-market at some point because Marriott is merging Marriott, Starwood and Ritz-Carlton in to a single program by 2018.

Currently there are three major options people are discussing:

Upon recent news regarding the merge, there will be little chance that Marriott change the timeline of its acquisition of Starwood. So the Amex SPG won’t last very long. Considering the tight relationship between Chase and Marriott, I personally doubt that Amex could issue a Marriott co-branded card, so this only leaves us the first two options. We are only guessing of course. Anything can happen.

We might take a look at the trade between Amex and Citibank again. Before Amex officially discontinued the card and Citi took over, the Amex Costco card actually stopped accepting new applications a few weeks before that. Will this happen again on SPG? I think this is a possibility and the first clue is on the surface.

Thanks for our reader @Falcon for providing the information. If we go to the landing page of  Amex SPG Canada and  Amex SPG Japan ，we can find such words on the web:

You can earn 2 Starpoints for every dollar of eligible purchases charged to the Card at participating SPG®* and Marriott Rewards®* hotels from November 15, 2016 through November 15, 2017

Screenshots of both cards are also attached. Something might kick in on Nov.15 and Amex may already be aware of the upcoming changes. However, nothing can be said for sure at this point. SPG co-branded cards are issued in 4 countries: US, Japan, Canada and UAE. Only Canada and Japan website are mentioning this mysterious date while the US and UAE issuers are showcasing higher signup bonuses now! 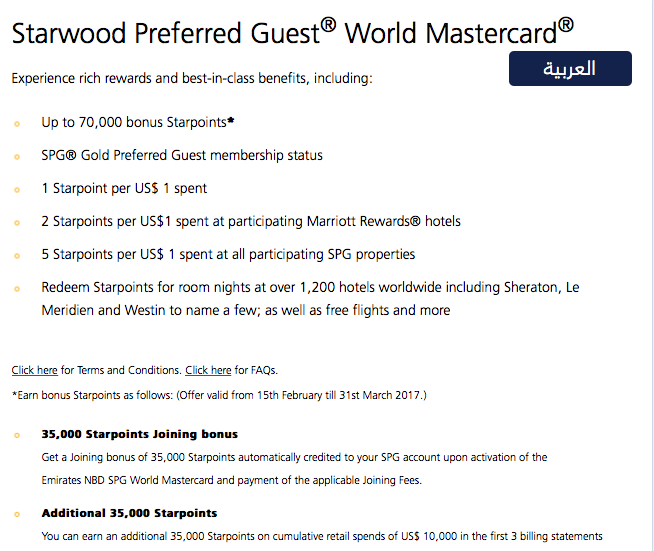 Anyway, the merging plan will be released this year and we can still take these last chances to earn and burn our SPG points. Stay tuned.