Chain of Contempt: Are Passengers Flying on Miles “Inferior”? Yesterday Lucky at One Mile at a Time posted an article describing a recent policy change made by Alaska’s Mileage Plan. As you have probably known by now, Alaska no longer allow its member to redeem miles on Cathay Pacific, Japan Airlines, and Hainan Airlines within 72 hours of departure if the award is solely intra-Asia. As far as I know, this is the third airline mileage program that implements such a restriction. The first two are:

Now of course those are very negative changes, and I personally hate them. The purpose of this post however is not to attack the corporate greed yet again. Rather, I’d like to direct your attention to the comment section of Lucky’s original post …

1. Some are happy that airlines crack down “mileage flyers”

Specifically, one of the comments praises Alaska for being tough on those redeeming miles, saying,

Question: How many commenters on here are Alaska elite’s?

Many like to claim that they are “customers” of Alaska, when in fact they are only “customers” of MileagePlan. I use the term “customers” loosely, because if you are transferring thousands of miles into a frequent flyer program, then grabbing the best redemption’s (which are a net cash loser for MileagePlan), then you are not really a customer of MileagePlan, but instead a raider.

I understand why you’re pissed, I used to be amongst you, but as the mileage game has become more mainstream over the years (thanks to blogs like this one), airlines are removing many of the cheats in order to protect their true customers. As a multi-year elite of Alaska, I applaud their effort to restrict access to non-Alaska customers.

OK, I get it that some flyers who buy their premium tickets with cash often look down on point & mile chasers. Below is another example.

When Emirates launched their new flagship 777 with fully enclosed suites, it basically blocked, and still blocks, mile redemptions for the new First Class product. I have seen some cash flyers applauding this move:

Great News!! Tired of all the non-paying tyre kickers monopolising first class seats by gaming credit card offers. I do pay for first class when needed. However seating in the same cabin as cheap folks constantly taking pics and of their journey to later brag about it on YouTube is particularly annoying for us “Real” elite travellers.

So when you think of mileage tickets, do you think they are “free”?

2. Award tickets are not considered “free”

From an airline perspective, award ticket comes from a special category of fare class and does not classify as Non-Rev, or Non-Revenue. The latter is normally an airline employee, retiree, and/or their family flying at no cost, or just for a nominal fee. The big difference is that Non-Revs cannot have a confirmed ticket and have to fly on a standby basis. Apparently ticket redeemed through miles does not qualify as a non-revenue ticket.

Additionally, there are several lines of evidence suggesting that airlines treat award passengers no differently.

In a nutshell, from an airline and regulatory perspective, those who sit in the premium cabins on miles are not receiving freebies. So is there a cost for award tickets? The answer is a big “yes”.

3. Transactions behind the scene

Let’s take Alaska miles and Cathay Pacific as an example.

Let’s say Cathay Pacific has released a business class award space (fare class U) and you want to grab it. So you call Alaska and tell the phone agent the flight you’d like to take. Then the agent finds the right award space, puts it to the reservation system, and asks for your credit card info. When that’s done, your hard earned/churned miles will be deducted from your account and in a few hours you would end up getting a confirmed ticket on Cathay Pacific. 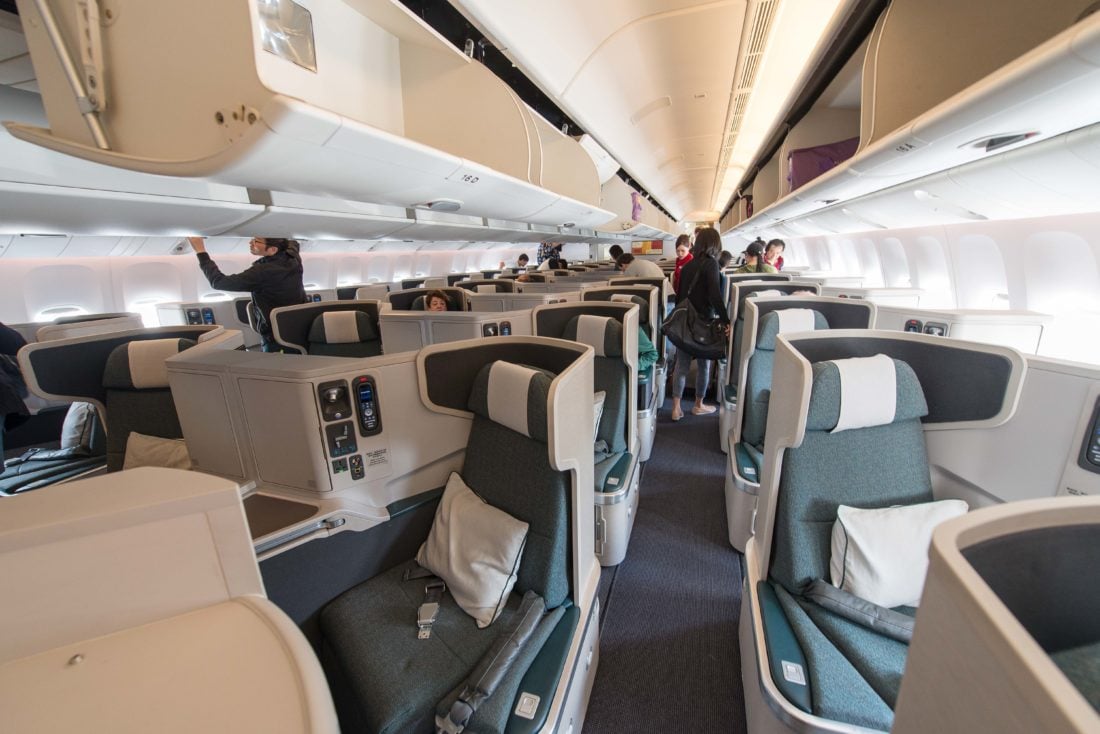 Flying Cathay Pacific’s business class for 50k Alaska miles one-way between US and Asia is an incredible deal.

Now think about this question: where do your Alaska miles go? Do they end up in Cathay’s hand?

No. The miles go back to Alaska, who sold the miles to banks long time ago or gave them to you directly because you flew Alaska or its partner.

What Cathay gets is cash paid by Alaska, at a pre-negotiated rate of course. How much does Alaska actually pay remains an open question, but one thing for sure is that it must be deeply discounted.

So you see, only the transaction between you and Alaska occurs through miles. In the eyes of Cathay your ticket is indeed paid in cash, not by you, but by Alaska. That is why Cathay does not treat you differently because you are on an award ticket.

4. Miles themselves aren’t free, either

Now let’s take a step back and examine one question: are miles themselves “free”? My answer is a firm “no”, for two major reasons.

Firstly, there is a real accounting cost associated with acquiring them. Either you have to fly to get the miles, or you have to make a credit card purchase to earn points and miles. Banks purchase those miles from the airlines. The the cost is offset by the credit card transaction fees.

Secondly and more importantly, there is an opportunity cost for getting miles. There are credit cards that offer unlimited 2% cash back on purchase. One could argue that the cost of spending on a credit card that gives you 1 point per dollar spent, is 2 cents per dollar. In other words, unless you value Alaska miles more than 2cent/pt, you shouldn’t really spend your Bank of America Alaska credit card on daily purchase.

In this light, one could potentially calculate the “alternative cost” of an award ticket. For instance, suppose my 50,000 Alaska miles towards a Cathay Pacific business class seat comes from 40,000 SPG points, which are accrued solely through credit card spending on 1x purchases. That translates into $40,000 spending. If paying instead with Citi Double Cash, I would end up getting $800 cash back. Hence, the cost of my “free” business class seat is 800 bucks. Better yet, if I get the points as a sign-up bonus, meaning spending $5,000 dollars in six months to get the 40,000 SPG points, then the opportunity cost for me is just $100.

Is it a heck of a deal? Sure yes! Is the ticket free? Hell no!

5. Final thoughts: don’t feel bad because you fly for “free”; you aren’t

Sure, everyone is entitled to their own opinion. It’s very likely that there will always be self-entitled people saying something like “award passengers shouldn’t get A, B, and C because they travel for free”. However that is absolute not true. Award tickets come with a real cost, and you rightfully qualify for all the perks and benefits that come with the premium cabin. Paying less doesn’t make you inferior, it makes you smarter.