Cathay Pacific has a daily Fifth-Freedom Flight between Vancouver, Canada (YVR) and New York (JFK). Operated by a Boeing 777-300ER in four-cabin configuration, this flight brings a true first class product to the North America transcon market. The only other airline consistently offering first class on this market is American Airlines, with its unique 321T transcon aircraft. The AA 321T has a first class seat identical to what Cathay offers in her 77W business class, so the difference is quite clear.

I used 40,000 Asia Miles plus taxes and fees for a one-way redemption. When the ticket was purchased, no saver award space was available. Instead, in my case Cathay Pacific puts me on a waitlist, and two weeks before departure I received an email saying my waitlist has cleared. This again demonstrates that Cathay Pacific consistently releases unsold seats to award space ahead of departure. Since Cathay has 3-abreast seating on its 77W first class, each seat has a whopping width of 36 inches. Most airlines, on the other hand, have 4-abreast seating in 777. Judging from the numbers at face value, this is the widest first class seat on any 777 out there. Needless to say the seat is incredibly spacious in reality. Cathay’s first class cabin is elegantly decorated. An Aesop-branded amenity kit and a Bose headphone were ready before boarding. Although Cathay’s headphone, QC15, is slightly outdated, the noise-canceling performance is still great. 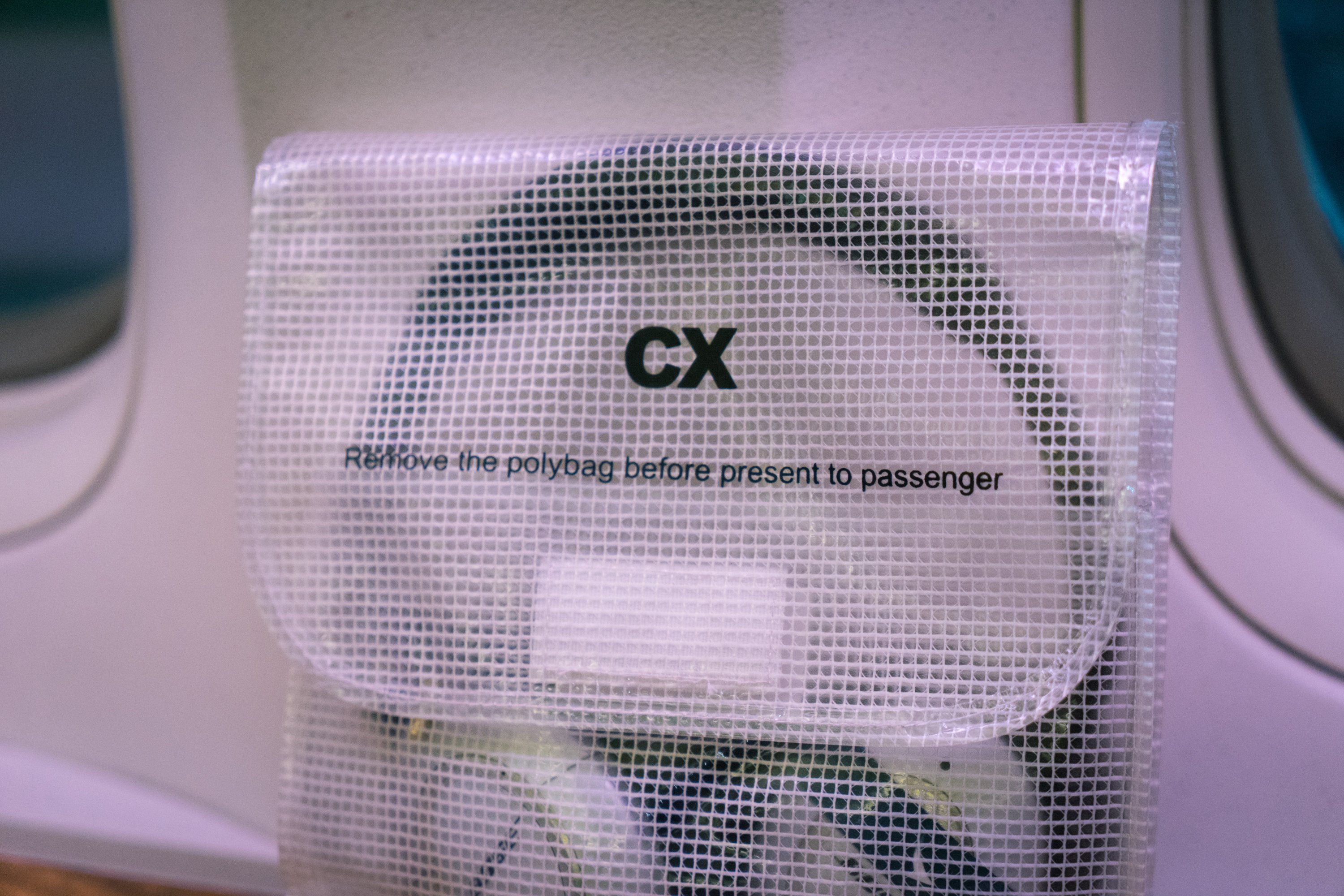 Pre-departure drink was offered and I selected some champagne. At this time dinner menu was distributed as well. Cathay Pacific deserves a lot of compliments for offering Krug Grande Cuvée on this route, the same renowned champagne that Cathay has on her long-haul flight. My flight was expected to arrive JFK in less than 4 hours and a half, due to the jet stream. If I was sitting in the back of the plane this would be a great news. However this makes premium cabin somewhat awkward: should you spend at least half an hour enjoying your multi-course dinner because of FoMO and arrive feeling underslept? Or skip dinner all together and get as much sleep as possible? Honestly I don’t know the answer, and kinda did both. 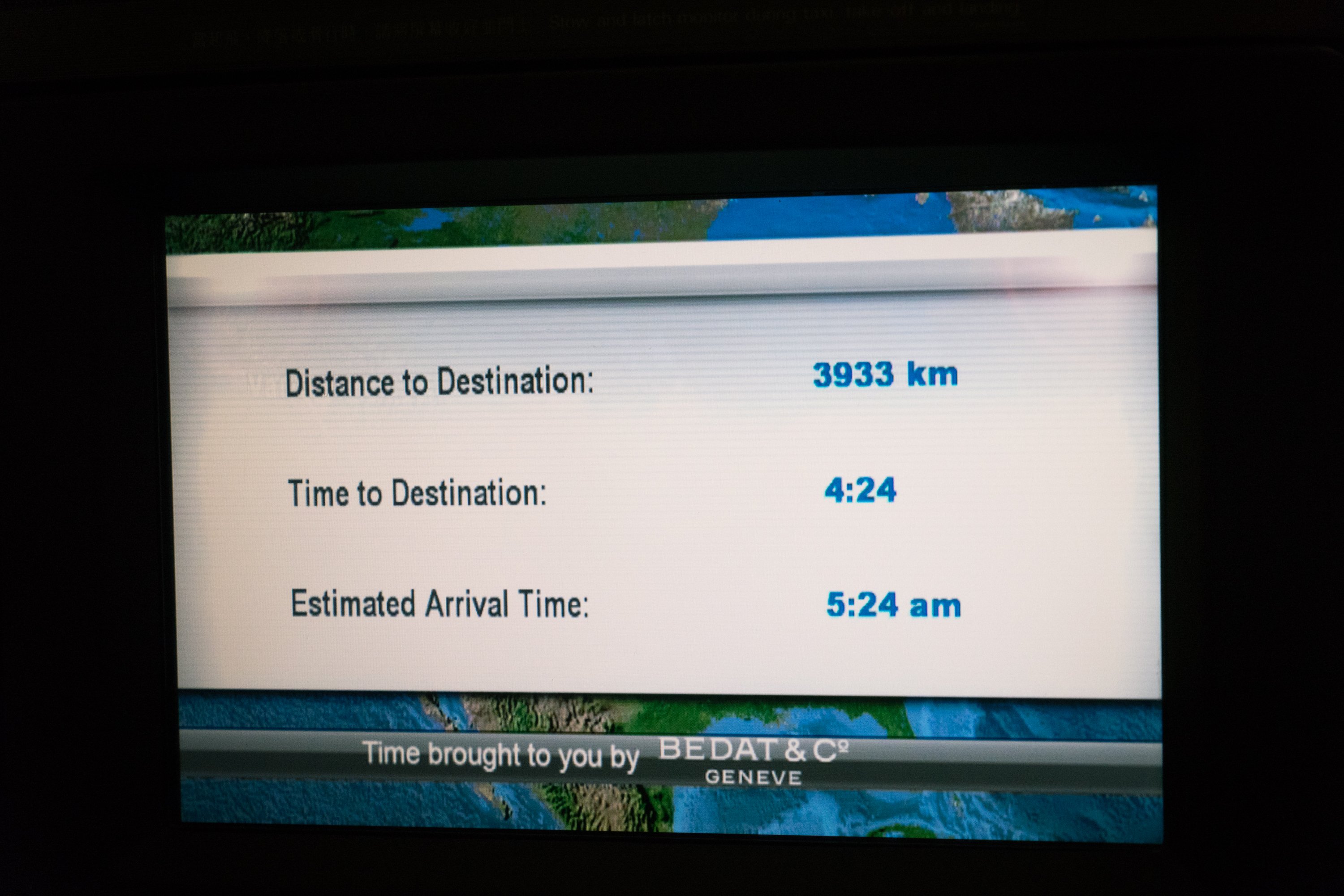 Due to the shorter-than-scheduled flight time, our aircraft was intentionally delayed on the ground. Otherwise we would need to wait at JFK for CBP to open. Vancouver airport does have a CBP Pre-Clearance facilities. The late departure time of CX888 (10 pm), however, means passengers need to clear U.S. immigration at JFK. After 40 minutes or so we got pushed back and were on our way.

Meal service started as soon as the seat belt sign was turned off. It was also very fast. Wanting to sleep, I just ordered a shrimp appetizer. Note that for this mid-haul flight no caviar is available, which isn’t a big deal. 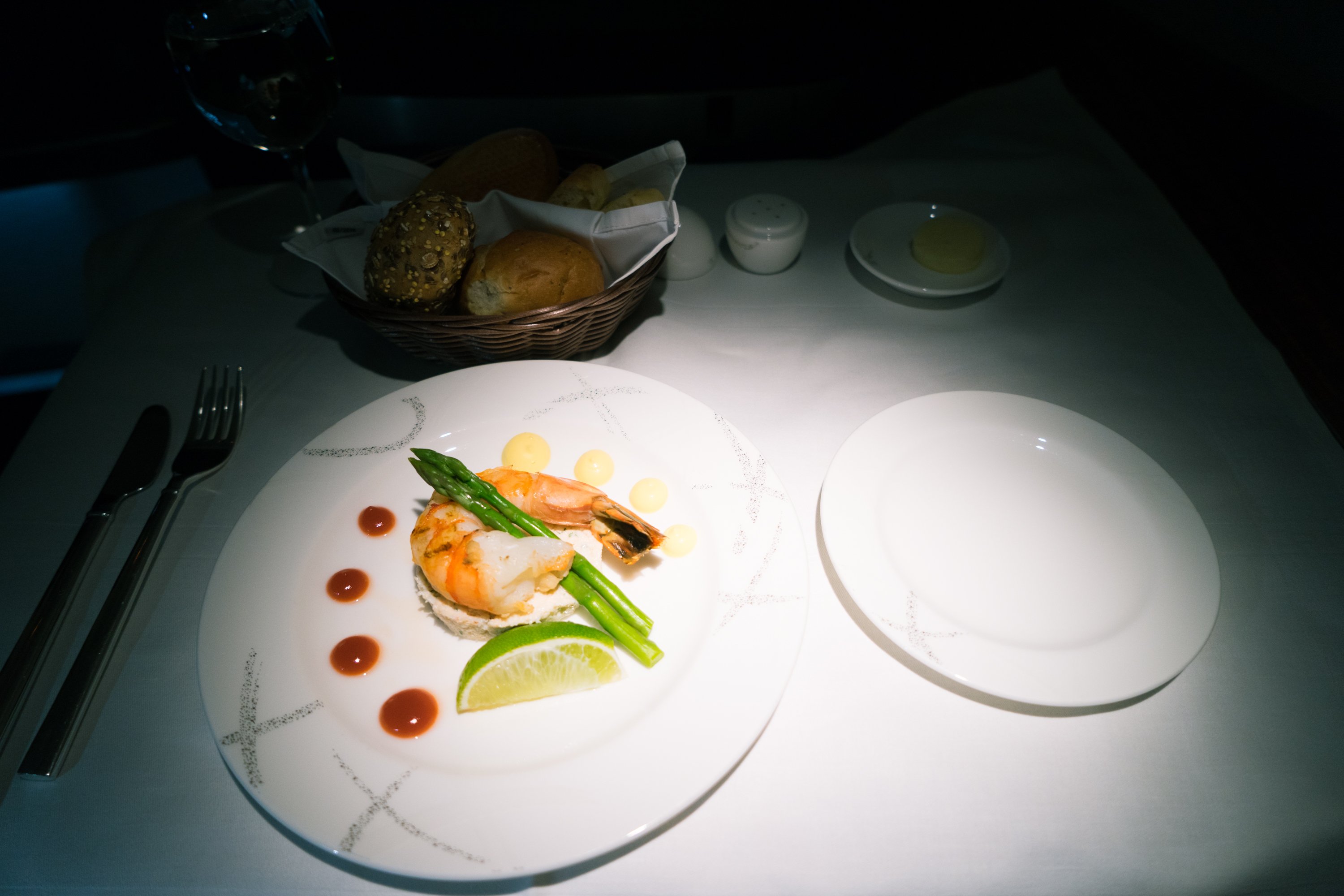 After finishing my meal I went to the lavatory to change pajamas. To my delight Cathay has Aesop toiletries on board. 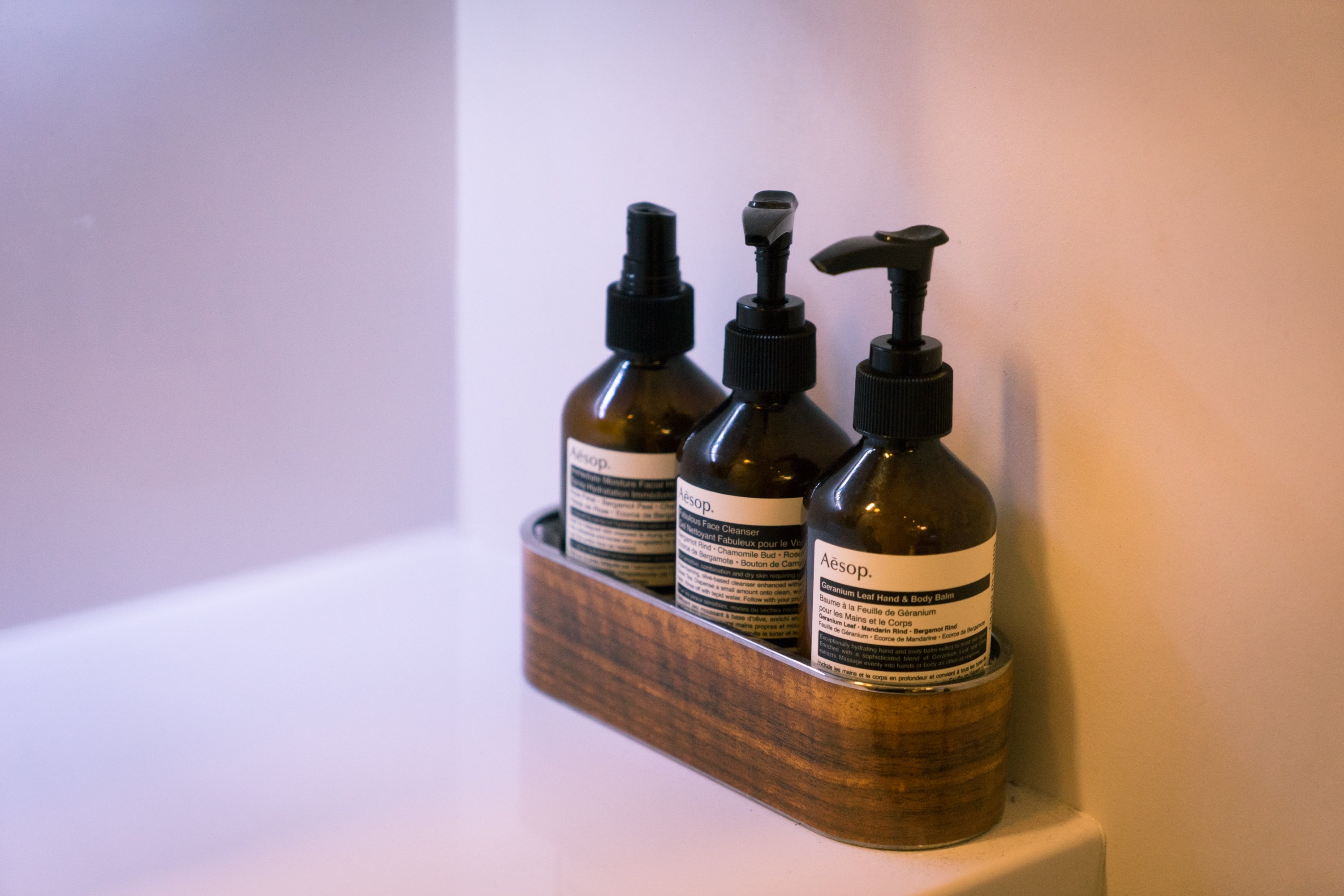 Cathay’s pajamas is supplied by PYE, a Hong Kong-based shirt retailer, who grows its own organic cotton in Xinjiang, China. In retrospect, PYE has the most comfortable pajamas that any airline has to offer. Also, do you see the small tag on the bag? That is a coupon that you can redeem for a small gift in PYE’s store or use as a cash coupon of HK$ 500 (the usual price tag for a PYE shirt is HK$ ~1200, just FYI). 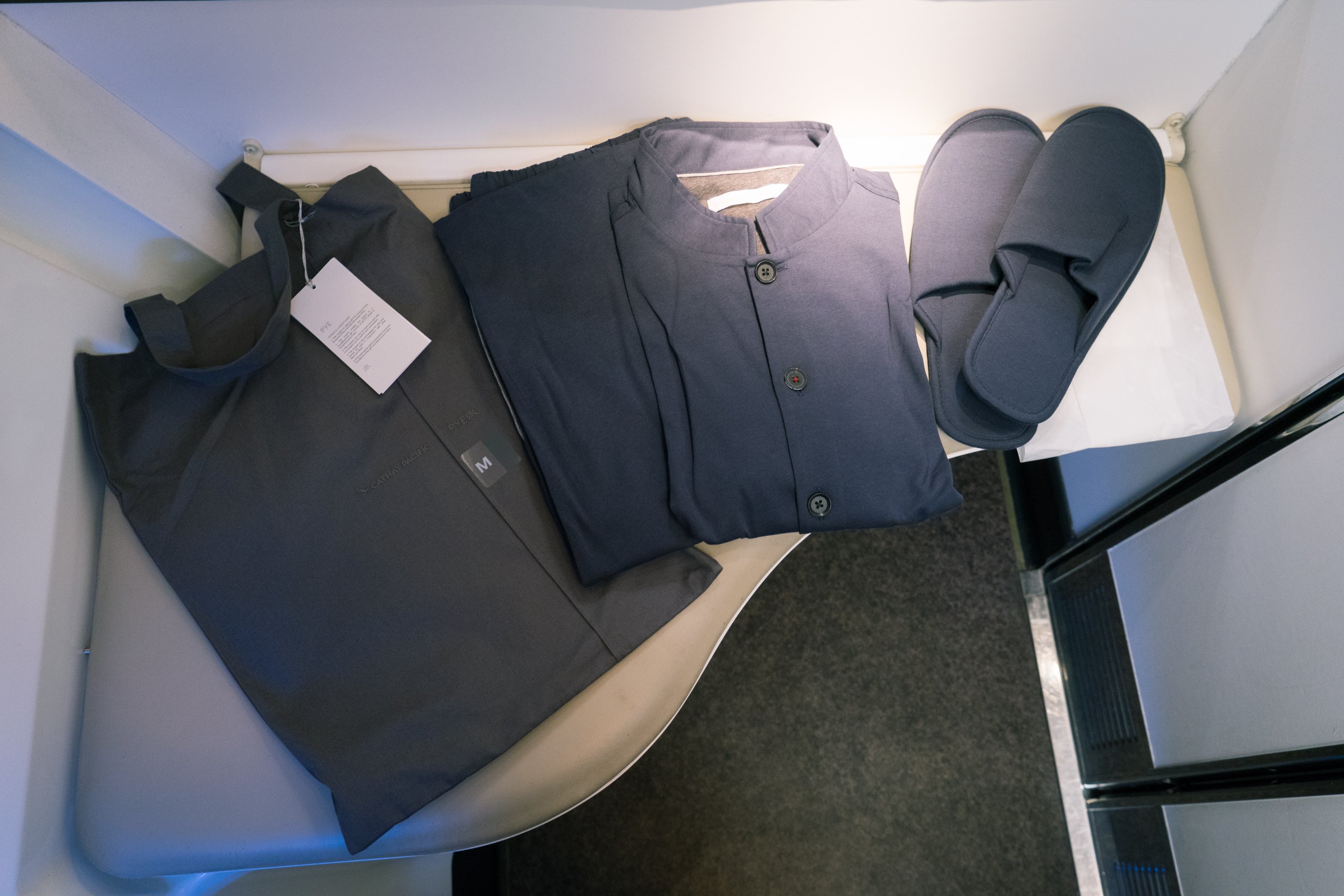 The bed was ready by the time I got back. So I ended up getting three hours of sound sleep on this incredibly roomy bed. While lying on the bed, I measured the noise level in the cabin using an App on my iPhone. I have been keeping doing this for half a year for now and am amazed by how variable the cabin noise can be on different types of aircraft. The sound level on Cathay’s 77W at cruising altitude is 58±1 dB, which is acceptable for a 4-hour flight but prolonged exposure to noise at this level is not advised. 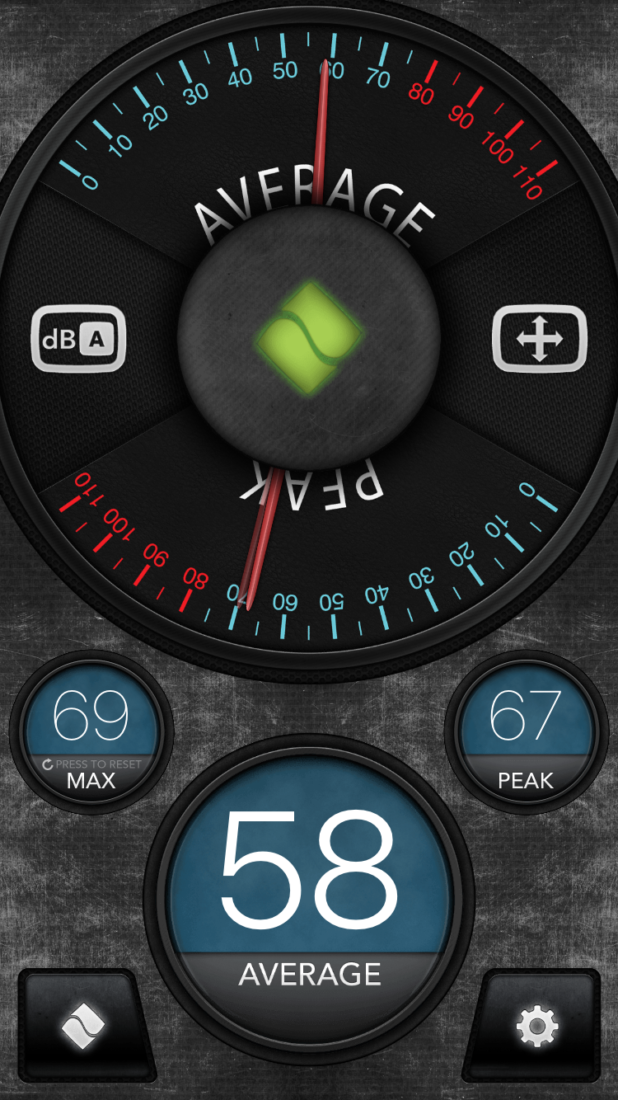 Other than the absence of caviar, the onboard experience on CX888 was pretty consistent with Cathay’s long-haul first class product, which is quite remarkable. If you are in Vancouver and needs to fly to New York, I think CX888/889 is a no-brainer. Now if only Cathay can operate a similar 5th-freedom flight within the United States …

In addition to the nice onboard product, Cathay Pacific has a lounge in Vancouver which just went through a renovation. The upgraded lounge, designed by Studioilse, a London-based studio, joins Hong Kong, Tokyo, Manila airports (among others) in bringing a smoothing atmosphere to air travelers. I would argue this is one of the nicest airline lounges in North America.

Upon entry I found the check-in desk to my left and a wall with post-modern painting to the right. I also got a sneak peek to the interior the lounge. Warm-colored lighting, on top of wooden walls, makes me feel the lounge resembles a residence. 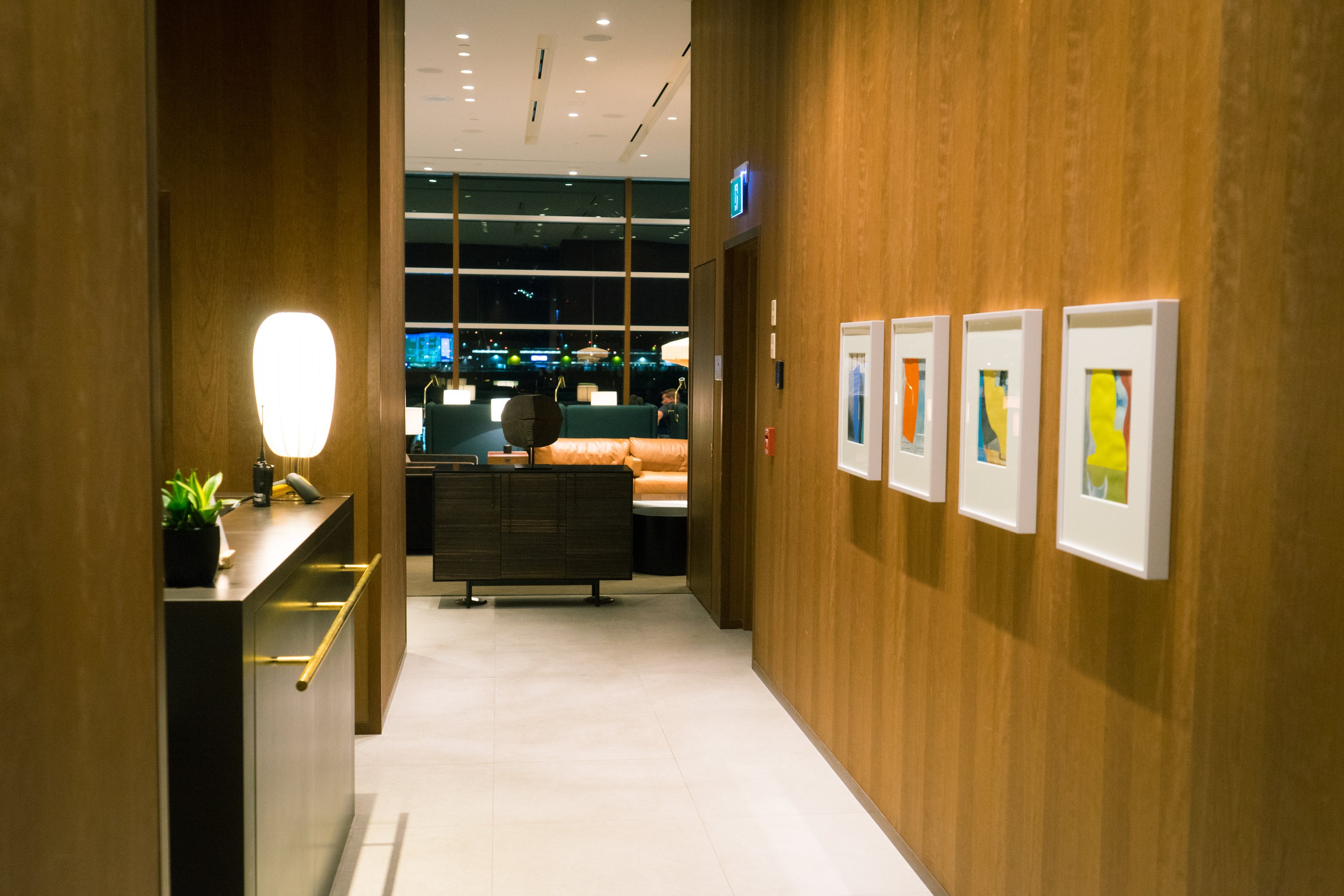 Inside the lounge the design is impressive: high ceiling, wooden interior, even more warm-colored lighting, quiet ambience, and floor-to-ceiling window overlooking the tarmac. All of these good stuff remind me of The Pier First Class lounge at HKG. 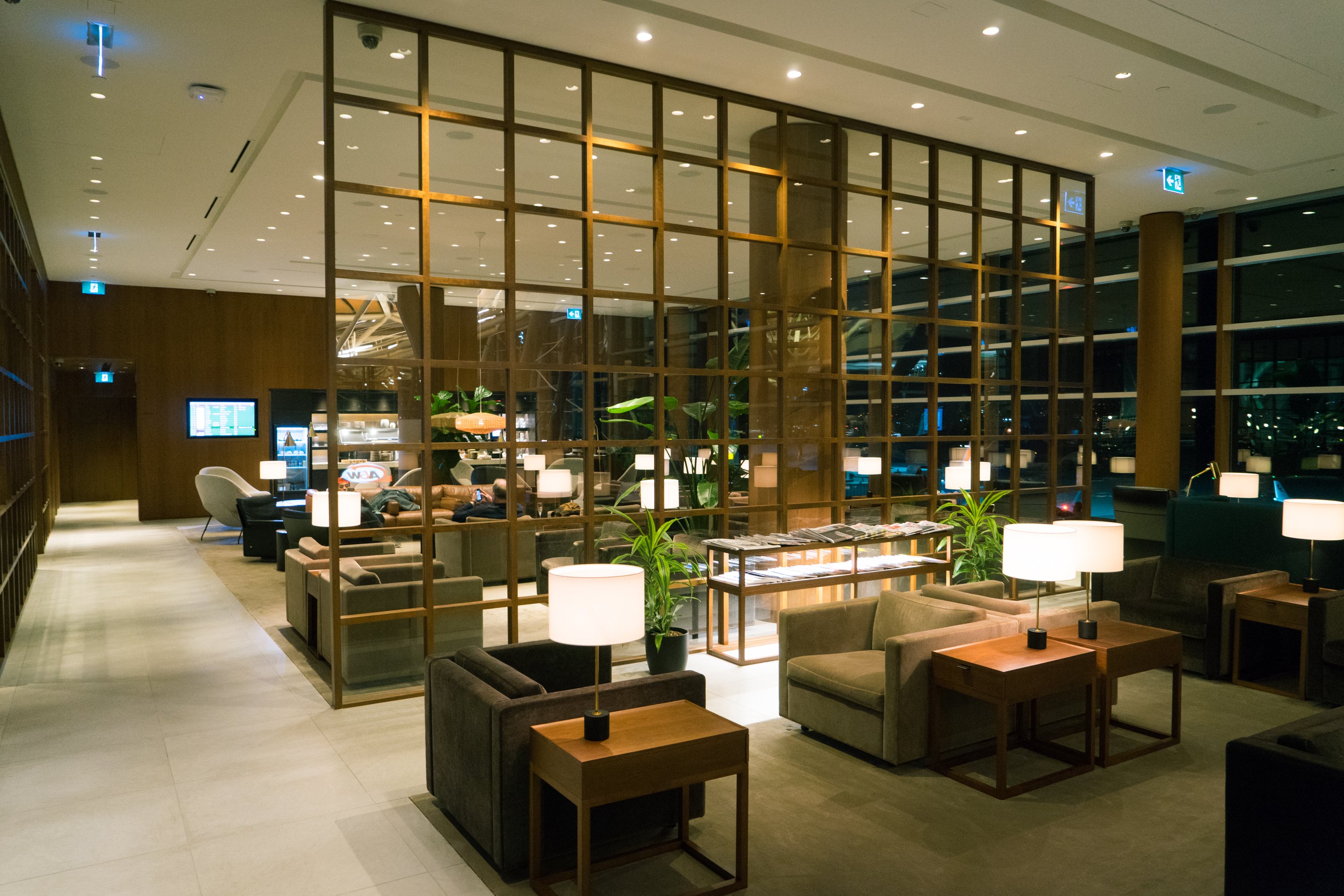 The selection of artwork exudes an exotic sense of the Far East. 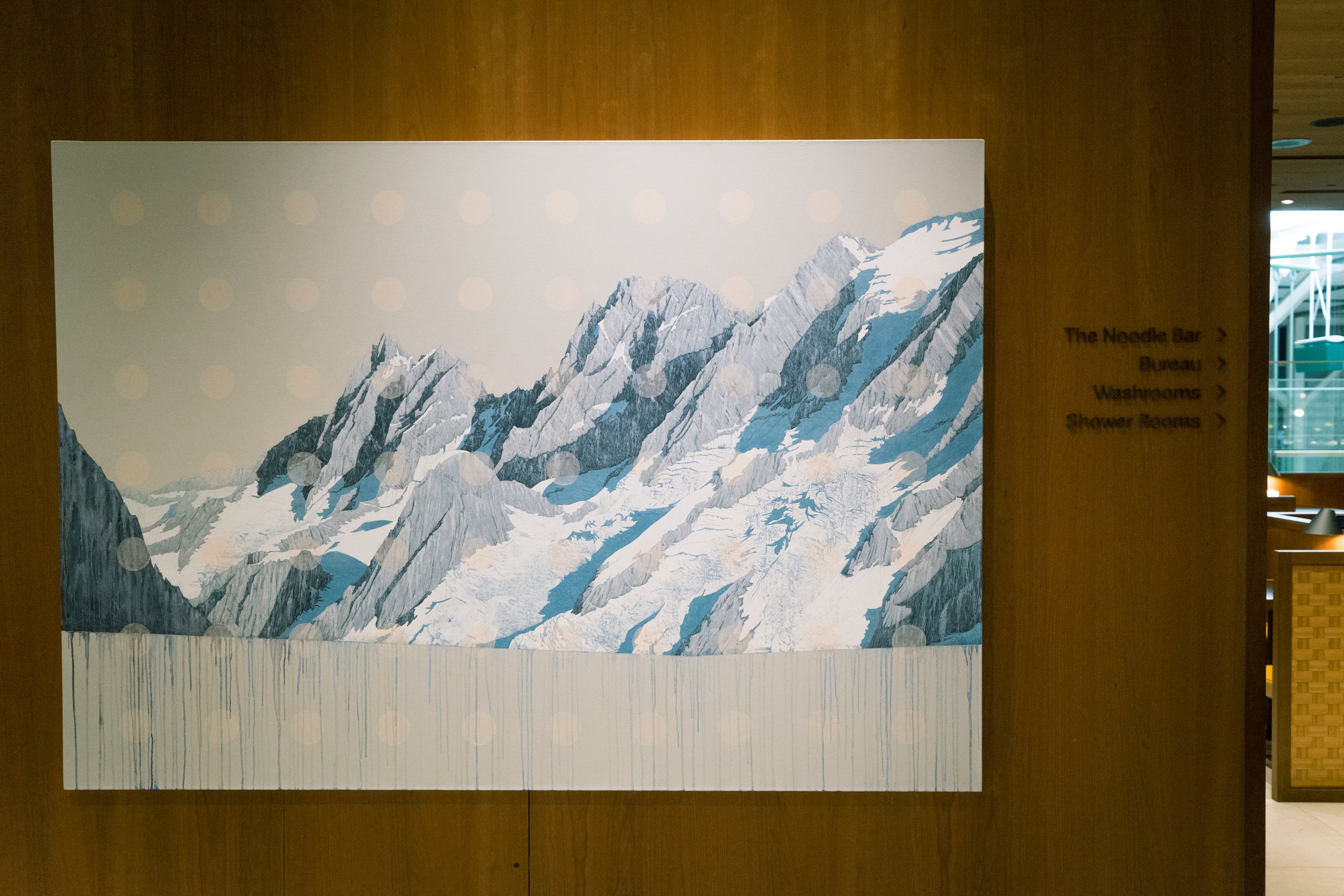 Notably this lounge has a dining area where you can have made-to-order dim sum and noodle soup. Incidentally Vancouver has the best and most authentic Cantonese cuisine on the entire North America continent, so it is a great delight to see the lounge benefits from that. A close-up look at the dining table. 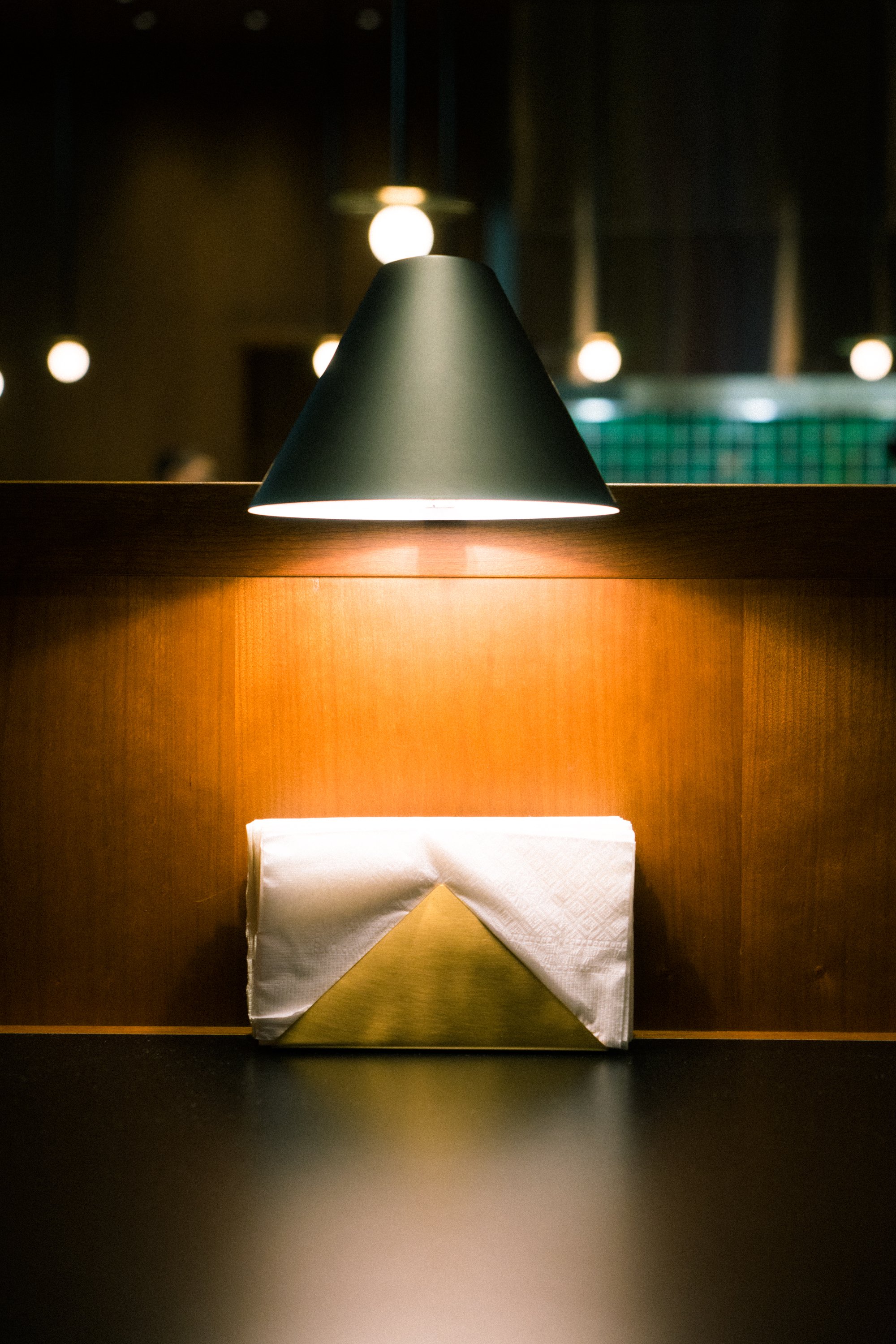 The booze section is quite expansive, though I’d rather save my alcohol quota for some onboard Krug. Next to the liquor is an espresso machine, along with some cookie and nut cans by its side. 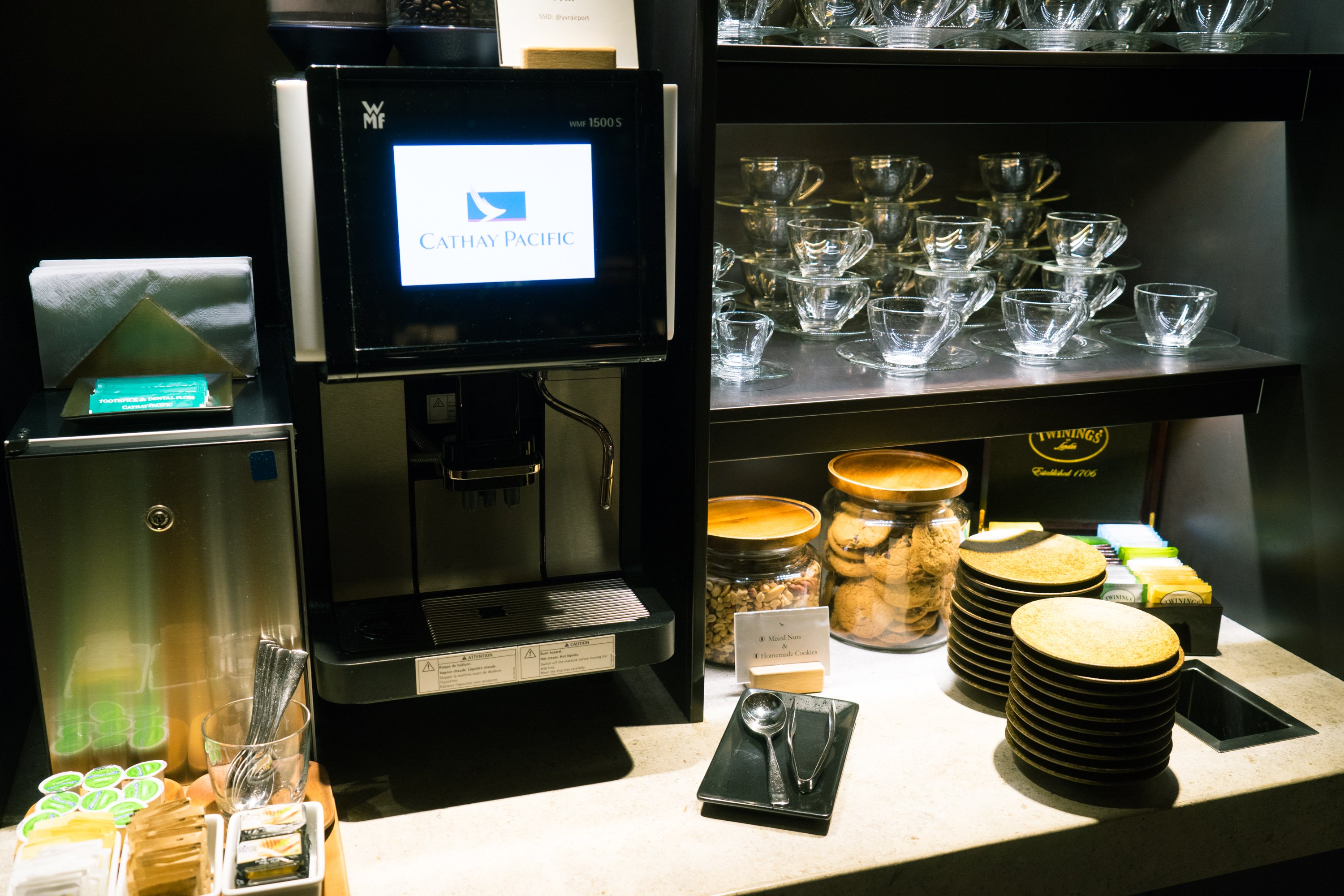 Walking out of the dining area I saw some open space, good for some casual chat. This area is located at the far end of the lounge. 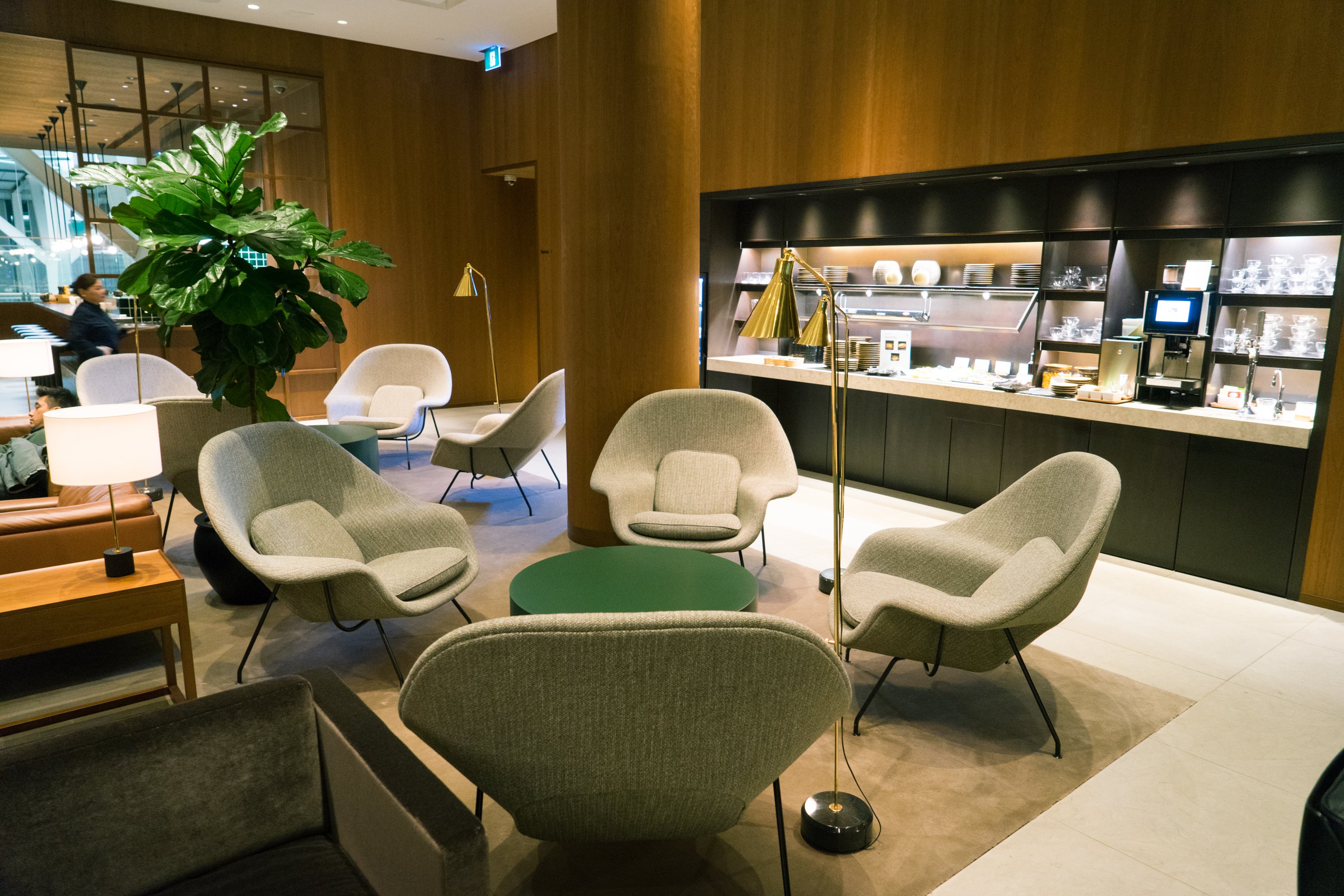 On the other side closer to the entrance, the feeling is more business-centered. The seating in this lounge is very comfortable. For example you have some semi-enclosed sofa seat with privacy partitioner on both sides. Then there are some seats with ottomans. There you could overlook the tarmac. It was late evening, however, so the view wasn’t that great. 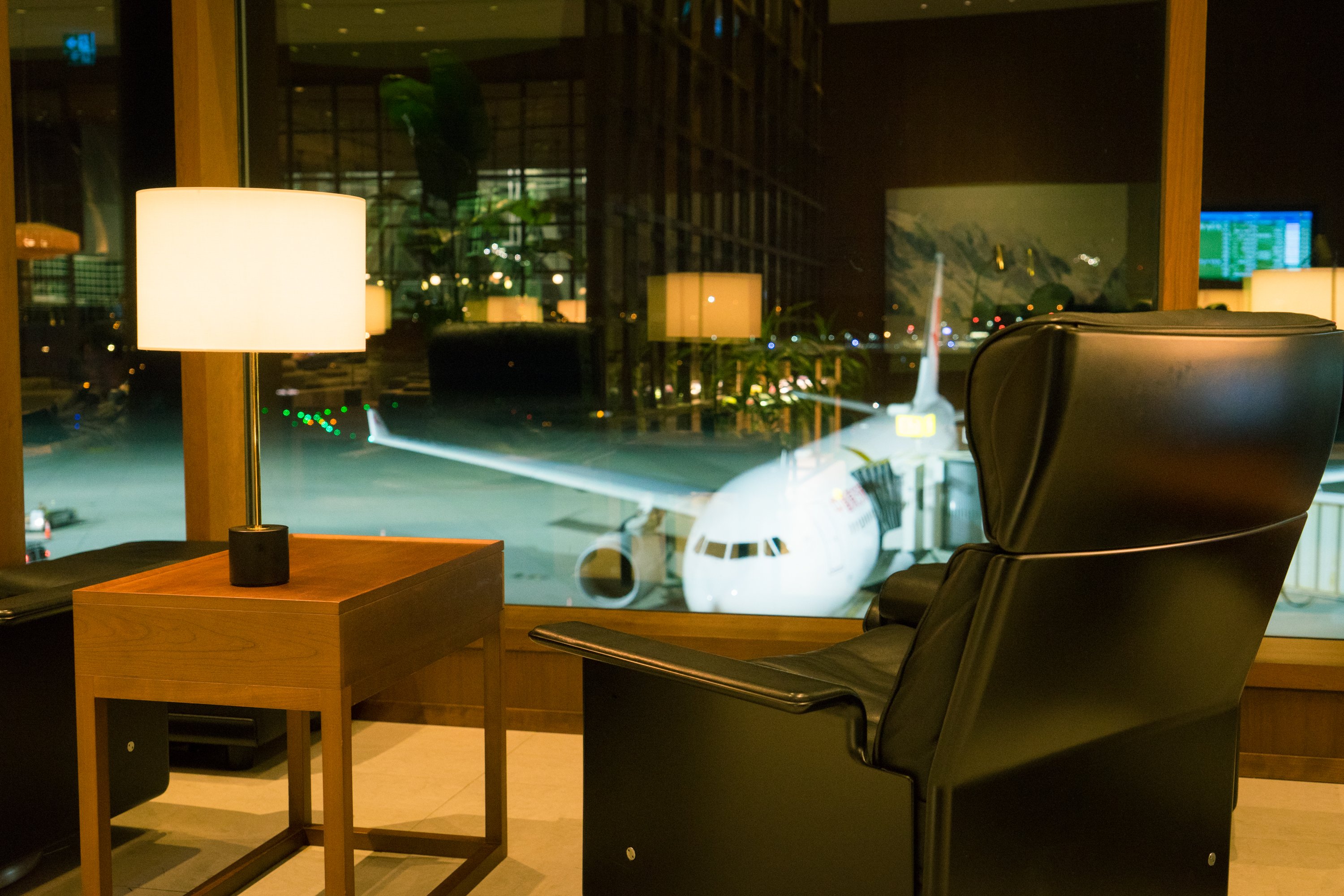 Even though Vancouver is not a focus city for Cathay Pacific the lounge itself really exceeds my expectation. I do hope that at some point JFK and LAX (both of which are served 3 daily flights by CX) could get a new lounge as well.